It’s time to catch up and move on to posting about Thailand , but I still have many more little things to share about Yangon.  Here are some thoughts and highlights:

In a confusingly anachronistic, Vegasy way, the Buddhas at each of the compass points in Sule pagoda had bright chasing lights radiating out from their heads like some odd cross between halos and Christmas and pinball machines all mixed together. Very eye-catching, but it sort of detracted from the traditional and reverent feeling I associate with ancient places of worship.

Another aspect of the day that stood out was watching the worshippers toss cups of water or hand-bathe a different set of smaller idols  throughout the paya. I later saw a photo of Hillary Clinton doing the honors, as well. The statue you wash/worship is connected with your day of birth. I like that the day has importance in this religion.

The only meaning I have for my day of birth is the old British rhyme, “Monday’s child is fair of face…”

Less happy was encountering the women selling birds outside the pagoda. Tiny little finch-like birds were packed into a basket, which the women would roughly plunge their hands into to grab a bird and thrust it at you to purchase. Essentially, you got to buy the bird’s freedom as a good deed. They broke my heart, so I bought one and let it go immediately. I’ve read about people buying every bird in the basket and setting them all free, but the catch is that you’re just rewarding the evil bird lady, who will pocket the cash and immediately procure more birds to sell the next morning. Or possibly only 10 minutes later, which is what we realized when we walked a block away, and passed a frantically cheeping crate filled with these poor little things packed much more densely than in the basket.

But, for some perspective, now that I’ve seen where they live, maybe people here don’t have the means or the will to coddle their birds like I would.

We took a local train trip and made it into a tourist attraction for ourselves. There’s a 3 hour circular route around the city- the journey just takes you in a wide loop, and comes right back to the central station.

Three hours is a long time to sit on a hard wooden bench, but the exposure to greater Myanmar is priceless. Even though it’s technically a “city” train, it’s not long before you feel like you’re out in the country and seeing little villages on the outskirts of the tracks’ range. Those views are quite different from the center of Yangon, and make you realize anew that the city is not really representative of the country as a whole. The train itself is pretty interesting, too. It felt really rustic and sort of like I’d imagine a cattle car might be.

The interior of the train car was filthy, and people kept bringing on things like large cartons of eggs and crates of vegetables, so the flies were a bit of a challenge for a while. But mainly, we were really struck by the daily life of those around us, and the living conditions visible from the train tracks.  When you show up in a city, you can be fooled into thinking a place is more modern/urban than it really is. 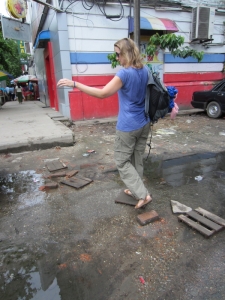 Remember my post on the sidewalks in Ubud, Indonesia? Well, Yangon’s not much different.  And when it rains, you suddenly discover the reasoning behind all the little bits of brick and concrete that are laid out like stepping stones in front of each high curb. They are the only thing that will get you dryly over the moat that forms during the storms. I love how the dog is watching Kim traverse the lake in the second photo…

…now stay tuned for reports of our Thailand adventures! 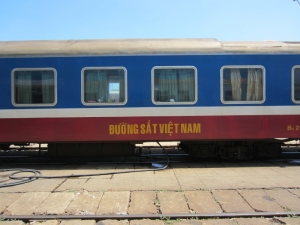 I got my first taste of cross-country train travel during my quintessential college Eurailing experience. Seeing Vietnam by train has been equally enjoyable. The train is such a great way to see more of a country and its landscape- often one of the most beautiful and unique aspects of a place.

I’ve been taking the Reunification Express, all 1726 km from the South (Ho Chi Minh City) to the North (Hanoi) with several great stops along the way.

Apparently you can get a very cheap open-ticket for a bus along the same basic route, but you miss much of the scenery, and you don’t get a chance to sleep in the train!

It’s not only a nice way to avoid a night’s hotel cost, but also a very relaxing way to travel and spend the night. The cost is even cheap enough to enable one to spring for a soft sleeper with air conditioning (Nam Mem Dieu Hoa) for many parts of the journey. But you don’t need it for the short bit between Da Nang and Hue, which also might be the prettiest. 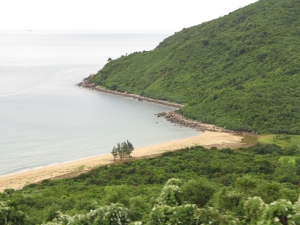 The train curls along the side of beachfront cliffs, hugging the edge of the green mountain. What views!

On one of my journeys, I made friends with the little Grandmother sharing my cabin. Since I had a middle bunk, she invited me to sit on her lower bunk with her in the morning while we ate breakfast. 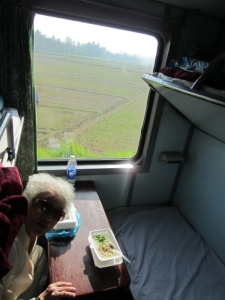 I had the chicken rice soup from the train’s food trolley, and she had brought her own rice and chicken. After I thanked her for the taste she gave me, she then cut part of her chicken meat off the bone and chucked it onto my plate. I have to admit it was better than the train food.  Then it was time for peek-a-boo with the little girl in the cabin next door. I encouraged her to pose for some photos, and when I handed her my sunglasses to wear, she immediately put one hand on her hip, and assumed the pose of a runway model.

I’ve got some great video of her parading up and down the train passageway. At one point, I thought I wasn’t going to get my sunglasses back. Despite the language barrier, we all got along very well and I’m pleased to have had the opportunity to spend time with ordinary Vietnamese citizens. 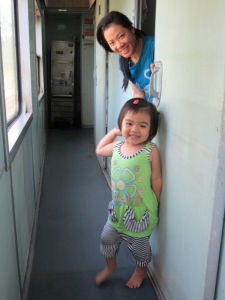 The train can be a great way to meet people and immerse yourself in a country.  Plus, it just seems more, I don’t know, romantic and traditional than a bus. There’s something to be said for traveling “old-school”. 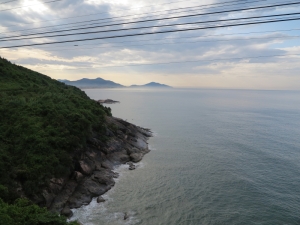