Immerse yourself in Manly things! I love that a beach/suburb here is named Manly. And not just coincidentally- it’s actually named Manly because when Captain Arthur Phillip showed up from England in 1788 and “discovered” the cove, he decided to … Continue reading →

We took a nice drive around some of the northern Sydney beaches the other day, where I captured this shot of downtown Sydney’s impending demise (by giant spider monster). I’m sorry that none of you will get a chance to visit Sydney now, but if it’s any consolation, I did get some nice photos while it was still around.

This might be a good time to mention that Australia is sometimes called the world’s most dangerous country for its enormous collection of deadly animals, including tons of venomous spiders. I was disturbed to find out that one of them is named the ‘Sydney Funnel-web spider’, which is not the least bit reassuring to hear about when staying in Sydney. 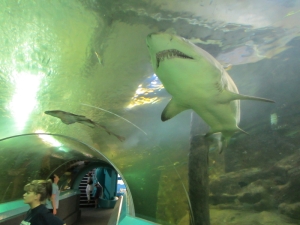 They also happen to have all 10 of the world’s top 10 deadliest snakes.  Also… sharks! At the beaches! And people keep swimming there anyway!  What a ballsy lot. But on the other hand, the murder/homicide rate is pretty low, so all-in-all, it probably balances out.  😉

My cousins David and Sarah have been kind enough to take me in during this trip, and I’m starting out by staying with David in Sydney.  He’s been generously ferrying me around to all the sights, starting with the … Continue reading →