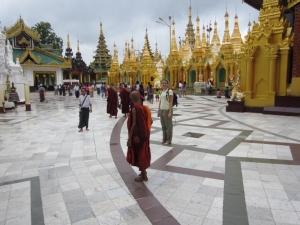 We were minding our own business, spending the day at Shwedagon pagoda in Yangon. We’d been walking around this amazing golden stupa for a while, and it’s like the Grand Canyon- you have to look away for a bit before you look back again to appreciate it anew- it’s such an incredible sight. So, we decided to take a little break and sit off to the side, but within sight of the paya’s eye-catching golden top. 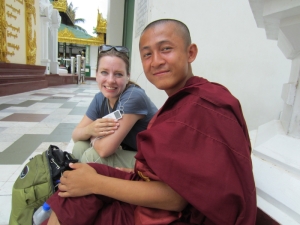 Within minutes, two monks walked over and asked if they could join us. Kim started talking to the older, teacher monk, while I got to hang out with the young “novice” monk.

My favorite moment of that day was listening to music on my iPod with the monk. I swear I didn’t corrupt him- he had told me that he’s “crazy for music” and mentioned Bon Jovi, Shakira, and Westlife were his favorites. I knew I had one Shakira song on my iPod, so I grabbed it from my bag, handed him the earpiece, and we set to listening together.  I played him some Stone Roses, too. 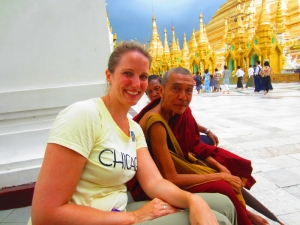 Mid-way through our conversation, the heavens broke open and unleashed a torrent of cooling summer rain, so the monks quickly guided us to a nearby prayer hall to stay dry. We sat with a bunch of other people in the shrine, discussing monky things and Buddhism until they had to leave for the novice’s daily lessons. It was an unexpected and magical 2 hours!

The thing is, monks have very clear rules about interacting with women. I’ve read that women can’t touch monks, and can’t even hand anything to them. You have to either put things down on the floor or hand them to a man who then gives them to the monk. When you sit, you shouldn’t sit above a monk or let your feet point towards a monk (or statues of Buddha). Few monks even made eye contact with me. So, I didn’t think we should have even been able to sit next to them, let alone talk with them. The whole experience was a happy surprise. 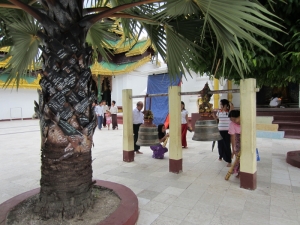 We gave them a donation which my monk said would go toward the “children without parents”, and in return, the teacher monk blessed both Kim and I. We each remarked later that we instantly felt a little lighter after the blessing, which included words about being free from worry. Alas, that feeling didn’t last long, but it was nice to feel for a time. And then to alert the spirits that we had done a good thing through giving our donation, we got to ring two enormous bells by hitting them with wooden staffs.

We also got to make a few new female friends, as well. As has occasionally happened to me in other Asian countries, we were watched by a small group of young women and then approached for a photo. I always like to turn the tables and get a photo of my own, so we got to pose about 6 times for shots on everyone’s cameras. I thought it was really sweet that they walked over and immediately put their arms through ours to pose. It’s always nice to meet new people and to be appreciated.   🙂