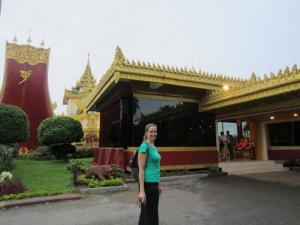 We attended an amazing night of never-ending food and a lovely three hour cultural dance show at the Karaweik Hall floating barge restaurant. It’s located in a park with perfect views of the Shwedagon pagoda across the Kandawgyi Royal Lake. So, if you don’t already have reservations at the restaurant, you have to pay an entrance fee just to get in the park. 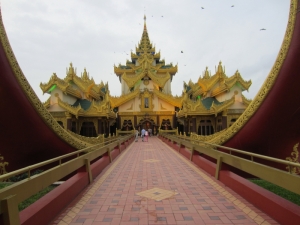 It seemed like a beautiful place, and if we’d known about it in advance, we probably would have arrived a little earlier to take advantage of the serenely landscaped greenery. Not to mention the impressive views of the barge itself.

The show began at the entrance where we were greeted by people in traditional and ornate costume, demonstrating Myanmar traditions. 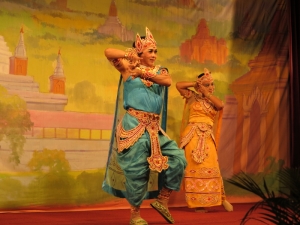 The cultural dance show was made up of many short and colorful scenes of traditional Myanmar dance. It reminded me of the Balinese dance show I saw, but it was less stylized.  The end dance was a showcase representation of all 8 ethnicities in the country, and their traditional clothes and work. 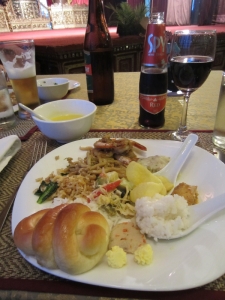 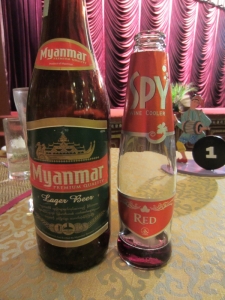 Desserts included a delicious sago pudding with coconut sauce, an assortment of fancy little cakes, a coconut pancake crepe to go with ice cream, watermelon and other fruits, and little glutinous rice desserts with a sweet maple sauce.

I also ordered a “spy wine”, which turned out to be a Thai wine cooler. Who knew?

I loved that we got to taste a little of everything, and then head back up again over the course of 3 hours to get seconds of our favorite dishes. 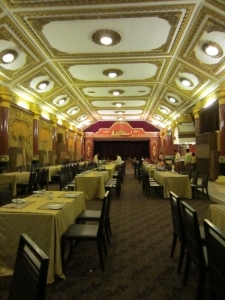 We shoveled in as much as we could, but ultimately were defeated by the awesome power of the buffet.  Perhaps even more filling was the realization that at 20,000 kyat, ($24 – ten times the cost of our meal the first night in Yangon) this was a night that most Myanmar people could not indulge in. I really felt like one of the “haves” that night (especially after a very enlightening train trip we had taken earlier in the day). This wasn’t as high-class as, say, the opera, but it was a big event nonetheless.  We were treated like important people of means, instead of backpackers, and all because of our Western levels of disposable income. 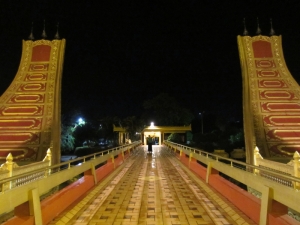 I think I got a flavor for what it used to be like for foreign journalists on expense accounts in SE Asia in the old days. It just didn’t feel like real life to be taking part in such a relatively elite event. On the other hand, we were seated next to an enormous group who were celebrating a 1-year-old child’s birthday party, which included little boys running around and jumping on the side of the stage. 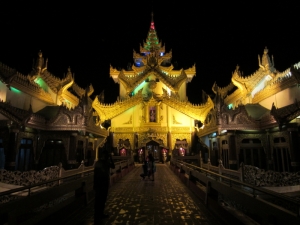 And at one point, I spotted a 6-year-old girl taking photos of the show with a DSLR with a fancy zoom lens that I certainly couldn’t afford. I thought at first that her parents were very trusting to let her hold a camera that valuable… until I looked back and saw her father walking up to her with an even pricier camera and realized that the one she was holding must be hers. Wow.  Everything is relative, right? 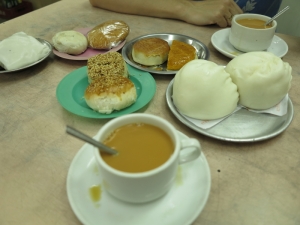 You might think that in such a far-flung foreign outpost as Myanmar that you might be without some of the comforts in life. That may be true, but you certainly don’t have to live without your tea.

We found an authentic (all locals) teashop near the market the other day, and decided this would be the perfect thing for the afternoon. 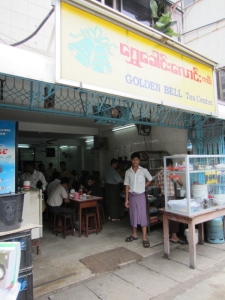 We didn’t know the proper procedure, so we simply walked up and directed a hopeful and questioning: “tea?” to the male server outside (these places all seem to be run by teenage boys).

He brought us in and seated us at a table with several little plates of goodies already on it. He then brought over another plate, with yet another variety of tasty treat, and served us up some strong, milky orange tea. I suspiciously asked the prices of everything on the plates. Most of the plates held more than one item. 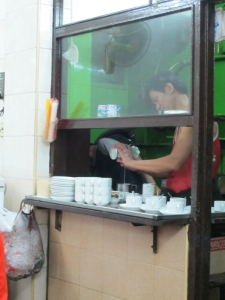 This would never work in the US, because the food may just sit on the table through a series of diners (but you have to let that stuff go when you’re traveling).  We tried an almond cookie that looked like it might be chewy, but turned out to be similar in flavor and consistency to biscotti, though it looked like a real cookie (I’m going through cookie-withdrawal here). 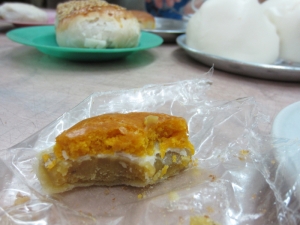 And we tried this interesting pastry that was orange on top, and had a nice almond-ish paste in the middle. This would be my favorite. There was a mix of both sweet and savory treats on the plates, but we stuck with the sweets for that day. 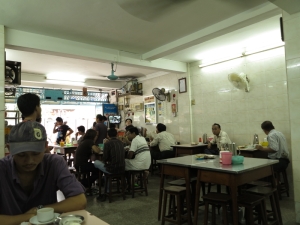 (Photo: View from inside the tea shop)

As with many Asian sweets, the delicacy was only mildly sweet. I’ve noticed a tendency to use an otherwise savory or neutral base (beans, rice, nuts, bread, cream) to make the sweets. 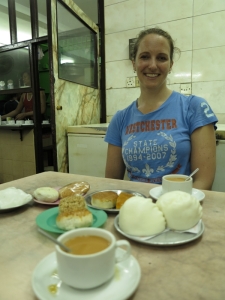 So you rarely end up with that mouth-coating, pain-in-your-fillings rush of sugar like you do with many of my favorite US and UK desserts.

But, never fear- US treats are still available. Myanmar can be added to the list of places where you can find Oreos.  Seriously- I’ve yet to visit a country without them.

We may not be able to force democracy on all the countries of the world, but we’ve successfully gotten them all to accept Oreos.  🙂 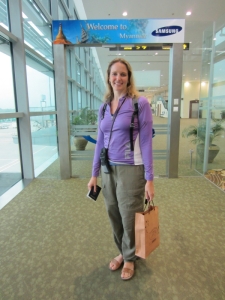 I’m lucky to have been joined by my friend Kim for a fun-filled 2.5 weeks through Myanmar and Thailand!  It’s so nice to have someone else around for the mosquitoes to target.  😉

We’ve enjoyed our welcome to Yangon airport- like BKK in Bangkok, it looks to be a sleek new building. As with many other things, so much is new and changing so quickly in Myanmar, that not only are the 2-year-old guidebooks out of date, but so is the internet. I’ve never seen anything like it.  Hotel prices have doubled, tripled, or quadrupled in just a year or two.  And our information keeps turning out to be incorrect. 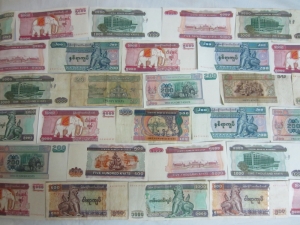 For starters, I kept reading that there are no good and sanctioned ways to change your money into Myanmar kyat and get a good rate, (you can’t use atms, travelers checks, or credit cards here) so you have to find a guy on the street and change it through him.  And this is risky, according to all I’ve read, because these black-market guys are slippery pros. Apparently they grab your money from you and count it out repeatedly, and then shuffle it around and distract you so that even the most careful and alert person ends up losing a few bills before the process is over. 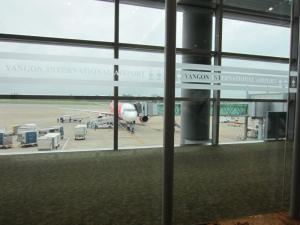 Well, now you can change your money at banks and get a very fair rate, without the hassle. I only learned that from a fellow blogger who was here a month ago. Oh, and I don’t even know what the bank rate is, because I changed my money at the airport. I had no intention of doing this, because I was told by 3 different sources that you can only get the official government rate at the airport (of $1 = 4 kyat), instead of the actual current rate ($1 = 850 kyat).  But as we arrived and waited for the others who were headed to our hotel (you can get a free 40 min. van ride from the airport if you book with certain hotels- even budget ones), the driver advised us to change our money at the airport, because the rate was even better there than at the banks in town. 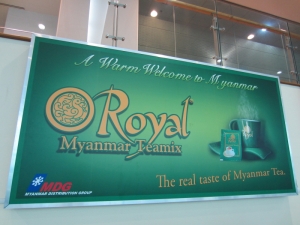 We checked it out and when we were quoted the rate we expected anyway, we happily changed our money. So, Lonely Planet was wrong again!  I’ve also heard a rumor that the multi-day visa process we went through in Bangkok(which we were told was either a next-day regular charge, or a same-day expedited fee… but turned out to now be broken up into 1,2, or 3 day return rates) may not be necessary because they might be offering visas-on-arrival to Americans now, maybe with a visa-approval letter like Vietnam allows. 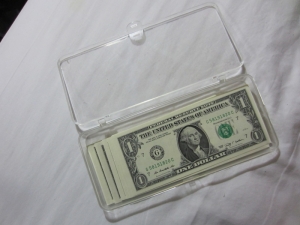 But that’s just a rumor… things are changing so quickly here, nobody can keep up.

One thing that has stayed the same is that they will only take pristine, un-creased, and unmarked US dollars for exchange. It also seems unfair that they won’t take Euros or Pounds, etc, but there you go. I got a handy little plastic case to keep my bills in good condition until they were needed. Other travelers have mentioned using cardboard and saran wrap. And if you don’t use all your bills in Myanmar, you can always save them for Vietnam and Laos, etc, where they may accept them for payment instead of local currency. 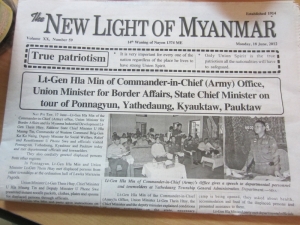 Incidentally,  some of the visas here in SE Asia are the coolest I’ve ever seen. Instead of a boring stamp, you get an official pre-printed, personalized sticker that takes up a whole page in your passport.

Until my next post, please enjoy the hard-hitting headlines in the Myanmar newspaper…