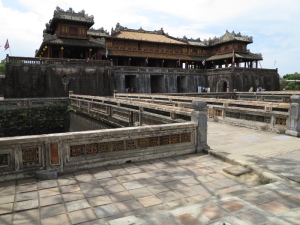 The entire city of Hoi An was declared a UNESCO site, (there are only 7 in Vietnam) but Hue has a UNESCO area, too- The Imperial City. I spent hours walking around this enormous walled fortress on the banks of the Perfume River.  (One source said it has a circumference of 10km.)  It was built for the Nguyen dynasty emperors, with the work starting in 1804.

Surrounded by a moat and stone walls, it contains the emperor’s palace, and many temples and family buildings.  And, strangely, 2 elephants. The koi pond was the other “interactive” component of the site. I bought a little bag of fish food to throw in the water and enjoyed watching the resulting noisy frenzy.

Though it was heavily bombed by the US during the Vietnam war, there were some buildings that survived, and many others that have been restored. But they were hard at work on continuing to reconstruct the many crumbled buildings that remain there. And there were a few areas that resembled the old ruined castles I used to tramp through in England as a child…

… stairways leading to nowhere, doorways from the outside- to the outside, opening from roofless walled rooms onto grassy green courtyards.  I can’t imagine how grand it must have looked two hundred years ago, but the parts that remain today are beautiful.

I loved the dragons that line some of the stairways and appear to be flowing down them to greet… or maybe threaten you?

The symmetry and size of the buildings is impressive, as are the colors and detail that decorate the gates, roofs, and lintels.  Besides food, a peek at another country’s culture and history is my favorite part of traveling.  And what could be more fun than getting to walk through a place called “The Forbidden Purple City”? 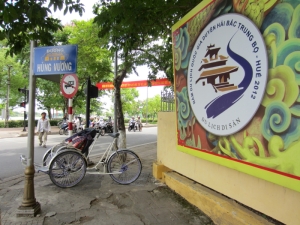 I’ve now been in 5 cities in Vietnam (Ho Chi Minh City, Nha Trang, Danang, Hoi An, and Hue) and I have to congratulate this country on having the most consistent and helpful street signs I’ve ever encountered before- anywhere. Considering that I’m no expert on the Vietnamese language, it’s so reassuring that almost every street corner (and I think it really was every single one in HCMC) has street signs, so you don’t ever have to get lost.

And every hotel I’ve stayed at has given me a handy little free city map, so I just carry that around in my pocket, and I’ve never been lost here for more than 1 block. It’s fantastic.  It’s really helpful considering that the street names in each city are at least 50% the same as in every other city. I keep seeing the same street names repeated in each new part of the country- all the way from the South to the North.  Everybody has a Hai Ba Trung and a Dien Bien Phu, several Nguyens, and a Le Thanh Ton, etc, etc.  I know we have a “Main Street” in every town in the US, but many of these streets are named after important historical figures or sometimes serve as descriptions of the items sold on each street. And that’s an historical practice in itself. Regardless of the name origin, I’m glad that the Vietnamese are invested in keeping me from getting lost! 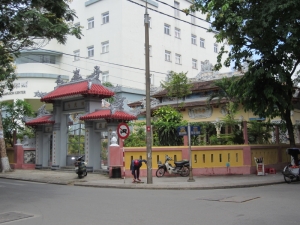 These are just some little shots from the streets of Hue, (much less crowded and crazy than HCMC, for the most part) and a view from my hotel room in the evening.

Coming up soon… The Imperial City! 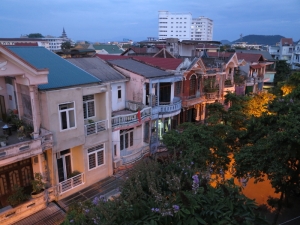