I visited Ho Chi Minh’s Masoleum on one of my last days in Hanoi.  Apparently, the poor man wanted to be cremated, but instead has been lying in state in a large square gray granite building in Hanoi since 1975. I was told the mausoleum was open until 11:30am or 12, but when I arrived the lines were very long, it was 10:30, and they told me it closed at 11am.

They also mentioned that the left luggage office also closed at 11, so I’d have to get back to it quickly to get my backpack, which wasn’t allowed in. That left me 20 minutes.

A Spanish solo traveler arrived at the “left luggage” window at the same time as me, and together we ran off to the line, with the admonishments of “hurry, hurry!” coming from behind us.

We soon joined the line, skipping ahead of 2 blocks of people who were waiting to see the museum, as well, which stays open longer. The line moved really slowly, so I asked a few other guards, who each gestured us to jump ahead in the line. In the end, though it felt like we had cut in line very unfairly, (but repeatedly and with permission), we successfully hustled through the exhibit with time to spare. 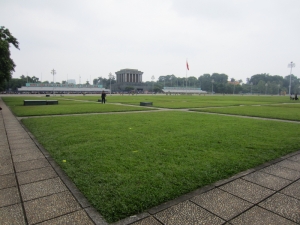 That was a lucky thing, because we were directed a block out of our way at the end and had to run several blocks back. We did manage to just barely make it back to the left luggage office in time.

The idea is that you move through the hall quickly, without lingering.

It reminded me of another type of visit, in London. While the Tower of London places people on a moving conveyor belt that passes the crown jewels, HCM’s mausoleum had guards who grabbed your arm and propelled you along, almost into the people in front of you.

The visit to the Mausoleum made for a quiet, dark, crowded, and solemn experience… until the anxious/giddy run back to the luggage office, of course.

Usually, being a walker is a benefit as a traveler. You get to see more of a city, find some hidden treasures, interact more with locals, and get some exercise to work off all the good food you’re discovering.

But so far in Vietnam, I haven’t found walkers to be a particularly relevant or important part of society. I’m often the only person walking down a road – not even the locals walk more than a block or two, it seems. EVERYONE has a motorbike, or a bicycle. The country seems so anti-walking, in fact, that though there are broad sidewalks, they are usually covered with parked motorbikes, or people sitting on stools outside their shops chatting, or mounds of dirt and construction materials, and pop-up restaurants/weber grills/food carts which take up the whole sidewalk with their cooking apparatus, ingredients, and tables and mini-chairs. So I often end up walking in the street, simply because there isn’t any room to walk on the sidewalk.

Also, almost half the people I see on motorbikes wear masks over their mouths. They hook over your ears and cover the entire lower half of your face. (Some extend to cover necks and ears, too.)  I’ve been told the masks are popular because people value light skin, so they do this as sun protection, but I also see some people wearing them at night- not as many, but a few. And the reception person at my hotel said that many people wear them for the “dirty atmosphere”, too. So I spent my 40 cents to buy one for myself, because my throat is a little rough, I’ve almost lost my voice, and I think defense against all the air pollution here will help out my laryngitis a little. And this way, I get to keep walking.  🙂

Here are some street and (blocked) sidewalk scenes in Hanoi: