I have more to post from Bali (and Australia), but maybe I’ll do an extra highlights reel at the end of this journey so I don’t get too far behind my current travels. I’ve met so many nice people of all nationalities already. I haven’t met many Americans, though- mostly British, German, Australian, Dutch, and French, so far. It’s nice to sit and chat with somebody with a shared language, and shared travel itineraries where you can exchange advice and experiences. Speaking of experiences, let me catch you up on Kuta. 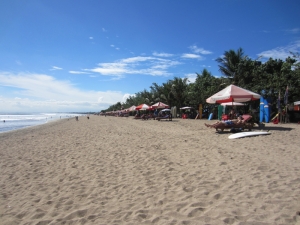 I have really mixed feelings about Kuta. If you just want a beachy holiday, and you don’t mind spending a little extra, I’m sure it would be fine. But if you’re not quite into sharing a dorm with 5 other people, but you don’t want to spring for one of the plush rooms in a resort for 5 times as much, there seemed to be a dearth of decent stuff in the middle (unlike Ubud). 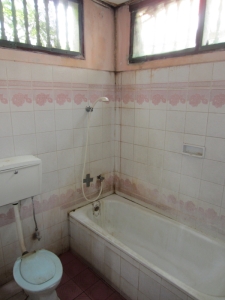 Here’s the bathroom of the revolting place I stayed in for one night, the bathroom which didn’t have a sink or a mirror… just a constantly running leaky filthy shower. 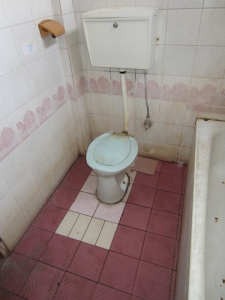 So, coming straight from somewhere in Australia, you’d probably think everything was (comparatively) a cheap dream. But coming from Ubud, I found the town dirtier, the hawkers pushier, and the rooms at similar prices to be of lower quality. That said, I did have a nice stroll along the beach, and the town streets were interesting, if a little more pre-packaged and manufactured than the more home-spun feeling you get in Ubud.

But I finally got to see the Doctor Fish!! I wanted to try this out in Tokyo with Kristi 2 years ago, but it was prohibitively expensive. I’ve been hearing they have this in malls all over Britain, but I haven’t really seen it in Chicago yet, so I tried it out here! It was hilarious. 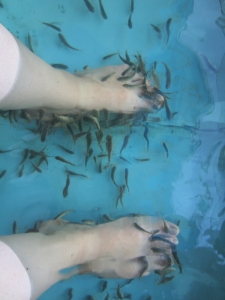 (It turns out that it’s difficult to take a photo of your feet underwater without making yourself look like a Hobbit.)

There were so many fish delicately nibbling all at once that it felt a bit like I’d imagine that a small electric current might. The experience was made even better by having all the salon girls calling me “darling” repeatedly. I felt like I should be in feather-lined pink robe, with a skinny cigarette holder clutched in my hand.

I also had a decent time at the post office, though the road there should, by rights, never legally be called a road.

Classic. Close, but not quite.

All in all, Bali was good. But I think that, as with anywhere else in the world, the more you’re willing to pay, the cleaner and sweeter (but more sanitized) you can make your experience.